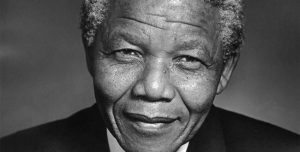 “A winner is a dreamer who never gives up”

Who was Nelson Mandela?

Mandela was a great statesman who struggled for freedom and equality between blacks and whites. He was born on 18th July 1918 in Mvezo, South Africa. After he attended schools for blacks, he studied Law at University.

What about Mandela’s youth?

In 1944 he joined the African National Congress (ANC) a political party and then begun the struggle against the apartheid regime of South Africa for a multi-racial democracy.

In 1962, he was arrested for his struggle against apartheid and sentenced to life prison. Mandela stayed 27 years in prison!

When did he become President of South Africa?

In 1990 he went out of jail and in 1993 he won the Nobel Peace Prize. In 1994 he obtained an end to apartheid, organized a multiracial election in which Mandela led the ANC to victory and became President of South Africa.